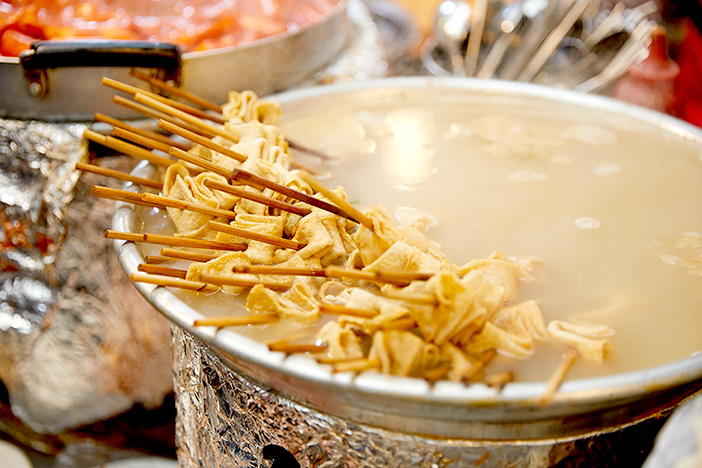 Carts and stalls selling these food items increase in number as temperatures drop, becoming easily spotted at street corners, thus drawing people to warm themselves up and have a bite before continuing their way. Standing around the cooking stoves not only helps everyone forget about the chilly winter weather for a moment, but also brings back childhood memories for Koreans.

A common winter street scene in Korea is that of food carts selling bungeoppang on street corners. Bungeoppang is made by pouring flour dough into the bungeo (carp)-shaped black cast iron mold and filling it with red bean paste. Bungeoppang can vary slightly in shape and color depending on the amount of flour used and the baking time, but the taste is always a crowd-pleaser.

For many Koreans, the sight of freshly baked bungeoppang and its sweet aroma wafting through the crisp winter air is a signal that winter has truly arrived. Nowadays, you can find a diverse variety of bungeoppang such as ingeoppang (mini-bungeoppang) and bungeoppang filled with ingredients other than the traditional red bean paste. Prices vary by region, but 3 to 5 bungeoppang usually sell for 2,000 won.

Hoppang is a typical Korean winter treat usually warmed in a steamer or microwave before being eaten. Traditionally, hoppang is filled with red bean paste, but other flavors are also available including fillings like meat, cheese, vegetables, sweet potatoes, pizza toppings, sweet pumpkin, and more.

Hoppang derives its name from the Korean onomatopoeia “ho ho” for blowing on hot food and also from the sound of laughter that comes from a family happily eating hoppang together. One bun costs around 1,000 to 2,000 won. This tasty snack can be purchased at nearly any convenience store, small independent grocery store, or market in the neighborhood.

Roasted chestnuts, or gunbam in Korean, are one of the most popular winter snacks as they can easily be prepared at home. Roasted chestnuts take a long time to cook thoroughly but a longer cooking time ensures that you get the best flavor. They are usually sold near traditional markets in small paper bags for 3,000 to 5,000 won.

Tteokbokki (spicy rice cakes) is a widely popular dish in Korea that has a very distinctive spicy, yet sweet, flavor. The main ingredient of tteokbokki is garae tteok, rice cake formed into a long white cylinder shape, which is mixed with eomuk (fish cake) and various vegetables like onions, cabbage, and carrots, and red pepper paste. The mixture is heated and served with a hot cup of broth that the eomuk was cooked in.

Tteokbokki is easily found all across Korea. Tteokbokki franchise restaurants have also increased in numbers and a wider variety of tteokbokki flavors are available including ones using curry, cheese, and jajang (black soybean sauce). Prices vary by store, but you can generally expect to pay 2,500 to 3,500 won per serving with complimentary refills of eomuk broth.

Yet another street food snack that Koreans like to eat as the temperatures drop is kkochi eomuk, or fish cake skewers. Eomuk is prepared on skewers then boiled in a broth flavored with radishes and kelp. Unlike tteokbokki, eomuk is not spicy and is a great complement to help soothe the spiciness of tteokbokki, and of course it’s the menu to look for when you want to warm up your body quickly. Kkochi eomuk usually cost anywhere from 500 to 1,000 won and are often sold at the same stands as tteokbokki.

Hotteok is probably the most friendly winter snack favored by locals and international visitors alike. In winter, places such as Insa-dong and Namdaemun Market in Seoul are dotted with hotteok vendors serving up these delicious little treats.

Hotteok is made with dough from glutinous rice flour and filled with a mix of sugar, peanuts, and cinnamon. The round and flat pancakes are then lightly fried in oil. Some variations include hotteok stuffed with vegetables or seeds. Be careful when you take that first bite; although the brown-sugar filling is delicious, it is often very hot. Like many of the other street foods in Korea, hotteok is a steal at only 700 to 1,000 won apiece.